Here is What You Get with Sitefinity DX 14.1

Sitefinity DX 14.0 has officially been released and there’s a lot of exciting news for the future of the Sitefinity platform.

The .NET Core Renderer with the new page building experience was released in BETA with Sitefinity DX 14. One of the features not available in BETA was the ability to build forms and add to pages using .NET Core, but in 14.1 the new form-building experience is now available along with a few other enhancements.

Now content creators can take advantage of this new page-building experience with .NET Core and easily build and add forms to pages.

There are other great benefits to .NET Core like faster development and deployment. This is because the .NET Core Renderer stands alone on its own application.

Our team was one of the first to use the new .NET Core Renderer and we really enjoyed the new page-building experience, and we think you will too.  Reach out to us if you would like a demo of the new .NET Core renderer.

Here are some screenshots of the new page building experience with .NET Core:

In the new page-building experience, instead of dragging and dropping MVC widgets onto your page, all of the page-building capabilities are within the page. 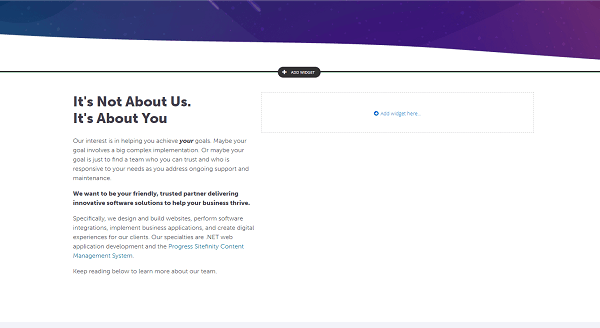 Once you select "Add Widget" in the page builder, a window opens to select the type of widget you want to add to your page.  There are basic widgets like content blocks, images, and call to actions, and also content lists and forms.

Instead of custom layout widgets, with .NET Core, you only need to drop one section widget on a page and then you can select how many columns and the size of those columns. 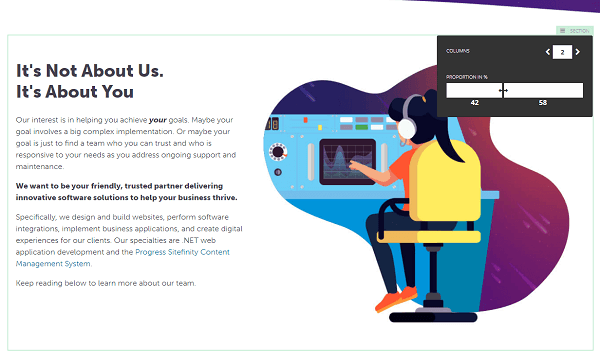 Adding section padding and margins is really easy with the .NET Core renderer. Instead of adding CSS classes to MVC section widgets, in .NET Core you go to the section properties and select how much spacing you want for your section. 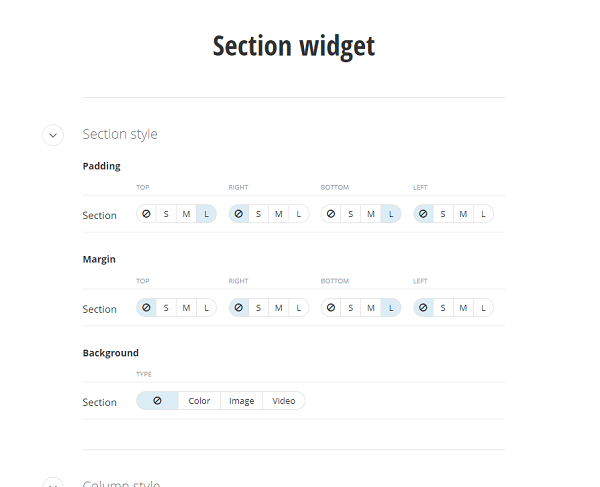 There are other great benefits to .NET Core like faster development and deployment. This is because the .NET Core Renderer stands alone on its own application.

Other .NET Core Widgets Announced with .NET Core and Sitefinity 14.1

In version 14.1, Sitefinity can now integrate with Cloudinary and Frontify.

Now when adding media to a page in Sitefinity, you can access it directly from your digital asset management software.  Most media, like images and video, have large file sizes and accessing this media through an integration to your DAM means you don’t need to host these large media files in Sitefinity.

You can find more information on how to integrate with DAM libraries in the Sitefinity documentation.

Bootstrap 5 was released in May 2021 and since Sitefinity uses Bootstrap as its out-of-the-box framework for frontend development, Sitefinity upgraded its resource packages to take advantage of Bootstrap’s current capabilities.

This gives frontend developers access to the modern features and capabilities of Bootstrap 5 but also gives content editors and marketers the ability to extend Bootstrap’s utility classes and to access improved custom style options that will help your site stand out.

An important note is that if you are upgrading to version 14.1 or newer, then Bootstrap 5 will be the only available resource package out-of-the-box.  To use a lower version of Bootstrap, like Bootstrap 3 or 4, then you need to add them manually to Sitefinity.

Azure Cognitive Search is an AI cloud-based search service. It is a fully managed search-as-a-service offering some of the most advanced search features and capabilities on the market.  It uses deep learning models to understand user intent behind a search and serves up the most relevant results to the user.

For large enterprise websites with information scattered across applications, using a leading cognitive search service like Azure Cognitive Search gives your organization a competitive advantage by enhancing the search experience for your website visitors.

Another feature being released with Sitefinity 14.1 that isn't being talked about much is now users will see notifications when logging in to the dashboard.  It's a small feature but something I think is a nice add-on to the dashboard experience.

The two circumstances where you will receive these notifications are for workflow events and form responses. 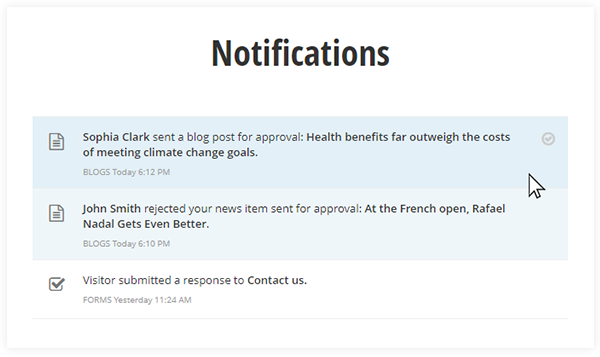 As defined by OWASP.org, "Cross-Site Request Forgery (CSRF) is an attack that forces an end-user to execute unwanted actions on a web application in which they're currently authenticated."

These protections are out-of-the-box with Sitefinity which helps to mitigate risk to your CMS.

The Cross-Site Request Forgery protection uses the double submit cookie method. For new projects, the feature is turned on automatically and is disabled for upgrades with the ability to customize.

For more information read the Sitefinity documentation or release notes.

What’s Going Away in Sitefinity DX 14.1?

There are two technologies that will no longer be available with Sitefinity: webforms widgets and the classic content UI.

ASP.NET Web Forms is a development framework from Microsoft. It was the first framework introduced with ASP.NET in 2002 – so it’s outdated.  The .NET Core framework we discussed above is replacing Web Forms.  This is just part of a constantly evolving platform, and it helps set Sitefinity projects up for future success with a much better framework for building web applications.

Another technology that is going away is the classic content UI.

In earlier versions, you were able to switch on or off the new interface. In Sitefinity version 14.1 and above you will no longer have this option. 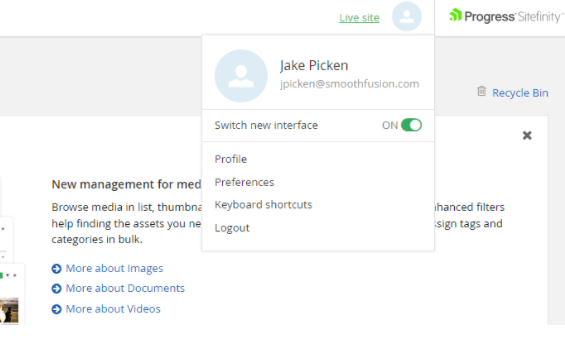 Sitefinity started releasing the new content editing experience in 10.2 with an early preview and the ability to turn on the new interface.  All that being said, the new content interface to the Sitefinity backend has been improved a lot since the end of 2017 when it was first announced.

This deprecation shouldn’t concern you at all as a content editor. In the releases where the new UI was still in its early stages, several times I needed to switch back to the old content UI when encountering bugs, but for at least two years now I’ve had nothing but a good experience using the new UI. Besides, it really is a better experience all around.

When setting up conversions or touchpoints in Sitefinity Insight, there are characteristics that you must provide to define your conversion or touchpoint.  You can now segment users based on the time frame in which they took a specific action on your site.

Also in Sitefinity Insight, when defining a user segment for personalization based on where a user is in the sales process, you can now select more than one lead scoring stage. This is nice because sometimes content is relevant to users in multiple stages of the buying process.

Track When Someone Downloads a File on Your Site

Knowing when a file is downloading and tracking this data is very important for marketers. Now when files are downloaded on your Sitefinity website, you are able to track these interactions.

Companies Can Be Confident in Sitefinity’s Capabilities

As a Sitefinity Partner, we are excited about the direction the platform is going. With every release, Sitefinity is becoming a more powerful, scalable, secure, and user-friendly content management system that companies can lean on to provide better digital experiences for their customers.

How to Create More Content Layout Options in Sitefinity Sitefinity Licensing and Pricing Overview How to Find a Sitefinity Partner Protecting Your Site from the Most Critical Security Risks What Are Widgets and How Are They Used? How to Use Tags in Sitefinity