When Performance Chemical Company of Midland, Texas, approached Smooth Fusion with the desire to have a customer portal built as a native mobile application, our software engineers determined that NativeScript was the best solution to create the native iOS and Android apps required.

The Need and the Solution

Performance Chemical Company (PCC) is a forward-thinking specialty oilfield chemical company that provides customized products and technical personnel. Among the advantages PCC offers is an in-house, state-of-the-art laboratory to provide their customers with actionable analytical data. The preferred method to deliver lab results to customers as soon as analysis is complete is through native apps for both iPhone and Android devices, making lab results available conveniently and on demand. 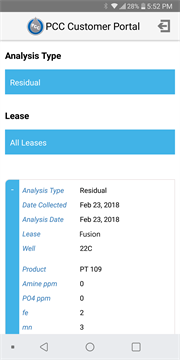 The app even displays charts that are generated within the app from lab results. 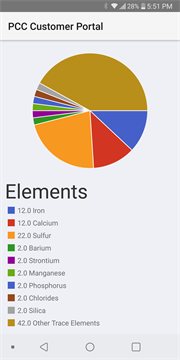 NativeScript is an open-source framework for building truly native mobile apps for iOS and Android from one set of code. So rather than a developer writing code in Objective-C for Apple’s iOS platform and separate code in Java for the Android devices, the developer can write one set of code in commonly-used web languages. NativeScript then creates apps for both platforms from that single code base.

There are many reasons to use NativeScript, including:

Cost. Writing and maintaining one code base rather than two saves money in initial development and on an ongoing basis.

Open Source. While NativeScript is 100% free and open source, it is backed by Progress Software (NASDAQ: PRGS), a company that has powered much of the software you use regularly.

Widely Used. NativeScript has been used by many companies you know, including Samsung, Salesforce, and Target.

If you would like to know more about the NativeScript technical details, keep reading.

NativeScript is not a hybrid solution which simply loads a web application in a web browser inside a mobile app. Solutions like those suffer from a lack of customization, performance degradation and poor user experience. NativeScript, on the other hand, produces completely native Android and iOS code and does not require a browser. Internally, NativeScript uses JVMs (JavaScript Virtual Machines) to interpret JavaScript code and call native Android or iOS libraries. This allows you to get the performance and experience of a native application without having to write any native code.

All NativeScript code is written in TypeScript (or JavaScript) while using an HTML-like syntax and CSS to design and render views. NativeScript supports integration with Vue and Angular 2+, two very popular web development frameworks. However, developers who already know Java or Swift may use that knowledge to write platform-specific code. This allows you to have the same amount of control over the device as an entirely native application. You can use this code to make platform-specific API calls and have total control over how specific business processes occur on each platform.

NativeScript also supports packages from several package repositories. You can import and connect Gradle (Android) and CocoaPods (iOS) packages to your application and call them natively from TypeScript code. You can also use any npm package that doesn’t depend on a browser. This smooths development for your developers as they can use several of the same packages that they are already accustomed to using for web development. This also allows your developers to jump right into the core of the project since they don’t have to reinvent the wheel and rebuild web functionality in a different language.

Smooth Fusion is custom web and mobile development company and leading Progress Sitefinity CMS Partner. We create functional, usable, secure, and elegant software while striving to make the process painless for our customers. We offer a set of core services that we’ve adapted and refined for more than 250 clients over our 18 years in business. We’ve completed more than 1800 projects across dozens of industries. To talk to us about your project or review our portfolio, send us a message and one of our project managers will reach out to you quickly.

Adding Banner Alerts and Messages to Your Site How to Create More Content Layout Options in Sitefinity Sitefinity Licensing and Pricing Overview How to Find a Sitefinity Partner Protecting Your Site from the Most Critical Security Risks What Are Widgets and How Are They Used?